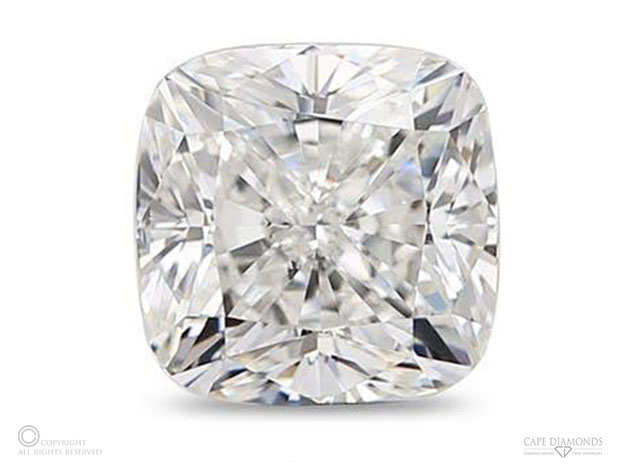 With its soft lines and diverse options for proportion and colour, the cushion cut diamond embodies feminine archetypes of affection and luxury, with a twist of variety and exclusivity. The classic shape and appeal of these diamonds preceded the invention and popularity of the now-famous brilliant cut round diamond, however cushion cut diamonds are making a big comeback. They are increasingly being seen on the ring fingers of famous singers, Hollywood actors, and style influencers. 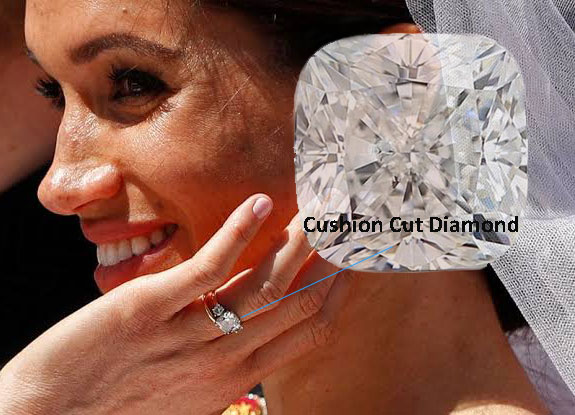 Cushion cut diamonds come in a range of shapes and sizes, can be more rectangular or more square-shaped in appearance, but their most distinctive quality is that, as seen from above, they have softened lines and gently rounded corners. They literally look like luxurious, plush pillows. 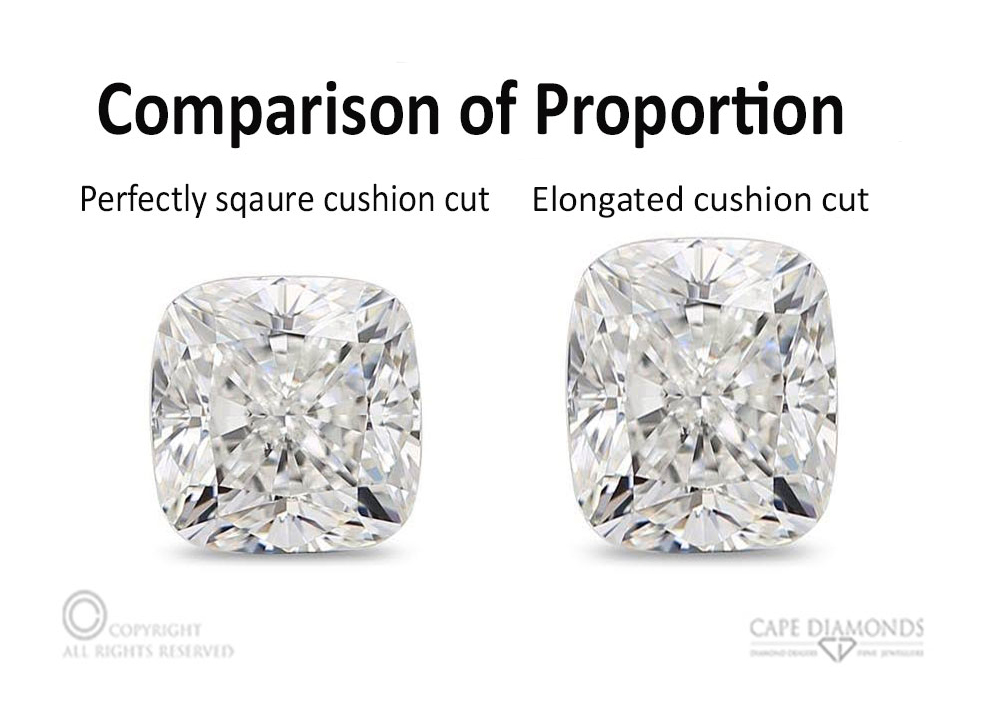 The cushion-shaped diamond has been around since at least the early 19th century, and was the preferred diamond of choice, prior to the invention of the brilliant round cut diamond.

A cushion cut diamond has a number of qualities that make it desirable: 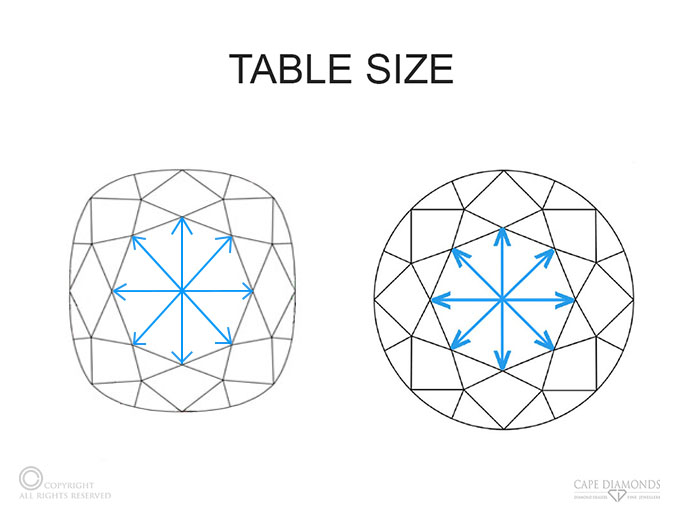 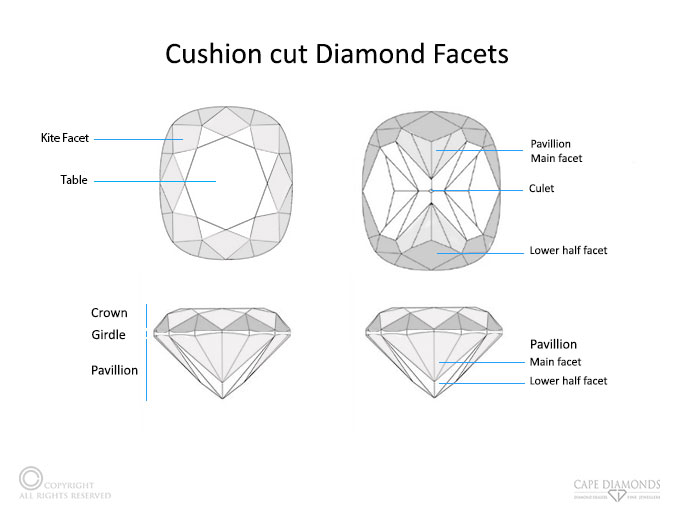 The cushion cut diamond is the queen of shapes, as it is available in such a great variety of contours and proportions. Though there are usually 57-58 facets in a cushion cut diamond, there is no one ideal shape or cut. Each variation tends to appear rare and unique. 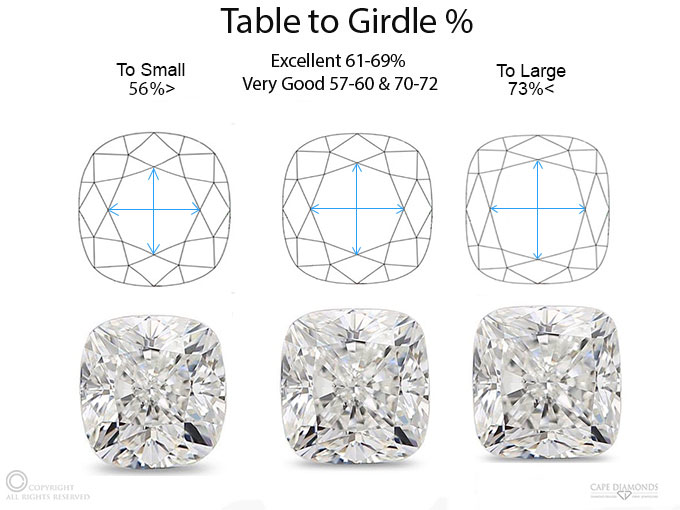 For instance, one of the most famous cushion cut diamonds in the world is the Hope Diamond, a massive blue stone of 45 carats that was purchased in India in the 17th century. Its cut is described as a “cushion antique brilliant with a faceted girdle and extra facets on the pavilion”.

When shopping for a cushion cut diamond, look out for your preference of length to width ratio, as well as colour. Because the cut embodies its history of combining antique with modern, there are cushion cuts for every taste, from the eclectic to the purist. Since there are so many variations, and no cut grade will be specified on the GIA certificate, if you want a quality stone with maximum sparkle, be sure to check the facets of a cushion cut diamond, with the aid of a reliable diamond dealer such as Cape Diamonds. Similarly, symmetry must be verified as this is vital to the appearance of the stone. As with other diamonds, ideally each half of the stone, vertically and horizontally, as seen from above, should match the other half. 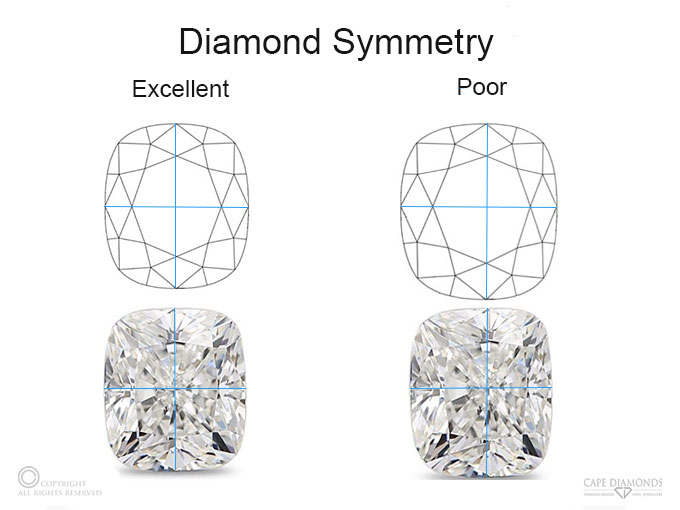 The pavilion depth and angle are also significant for maximum radiance and scintillation. The pavilion is the cone-shaped part of the diamond from girdle to base. The depth percentage of the pavilion is calculated as the percentage of the pavilion depth relative to the girdle diameter. The pavilion has main facets and lower half facets that reflect fiery sparkles of light when cut to ideal proportions. A shallow pavilion angle can result in a “fish eye” effect, while a pavilion angle that is too steep can result in your diamond looking like a “nail head”, with a dark centre. 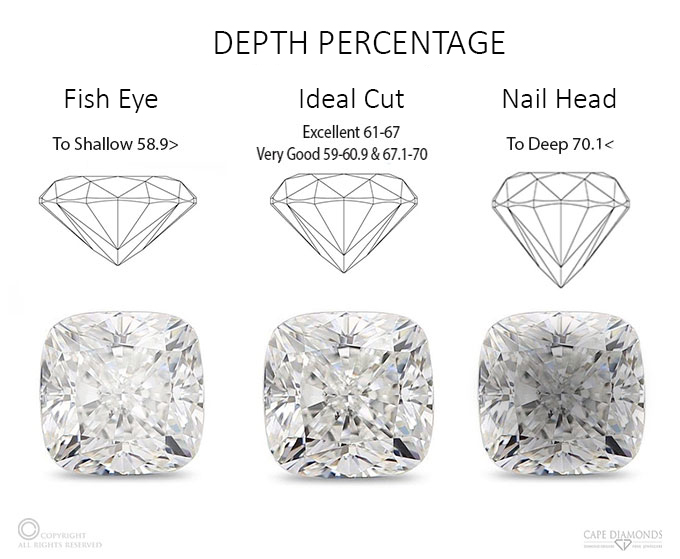 The cushion cut diamond is extremely amenable to any setting, whether you choose a solitaire, halo, or side-stone setting. It also pairs well with a matching wedding band that can slide under the one side of the stone.

The most popular and widely available cushion-shaped diamonds are modern brilliant cushion cuts – but you may come across more rare versions of the cushion-shaped diamond. Cushion modified brilliants have an extra row of facets on the pavilion, below the girdle, creating a floral effect. This cut gives the stone a unique and beautiful “crushed ice” appearance. These diamonds tend to be less available as there is less demand for them, but they are also less expensive than brilliant cushion cut diamonds, as more carats are saved when cutting them. You may also come across a hybrid type of cushion shape that has modified sets of four pavilion facets. Again these diamonds are less well known than the classic brilliant cushion cut, and they tend to be less expensive, with more of the stone being retained in the cutting process.

Whatever your style and preference, there is a cushion shaped diamond out there to match it. And one thing is for sure: When you are looking at the shape and facets of a cushion cut diamond, you are looking into the history of a bygone era, elegantly reclaimed in the present.

We can beat any quote.
If you can imagine it, we will create it.
Select Ring Back to Diamond Shapes
Don't forget to visit our blog All prices are subject to availability
and exchange rate fluctuations.